Why Do Catholics Pray for the Dead? — And Other Questions about Purgatory

On All Souls’ Day, the Catholic Church remembers all those who have died and prays for them in a particular way.

But why do Catholics pray for the souls of the dead — not only on November 2 but also on any day of the year? And does the Church really believe in the existence of purgatory?

“The whole of the first millennium is unanimous in the prayer of Christians for the dead,” Father Paul O’Callaghan, a priest of Opus Dei, told CNA. “The idea of praying for the dead is very, very old.”

Father O’Callaghan, who teaches theology at the Pontifical University of the Holy Cross in Rome, answered this and other questions about purgatory in an interview with CNA.

“Purgatory is not an individualistic doctrine, where I sort of resolve and sort out my particular personal problems and sins and faults,” he underlined. “It’s something that the whole Church does together.”

Praying for the dead can invoke a great sense of solidarity with those who have died before us, the priest said. “As we’re praying for them, we’re kind of saying to ourselves, ‘Well, I hope somebody will pray for me.’”

Father O’Callaghan pointed out an important clarification, that “Christ is our Savior. Christ is the one who frees us from our sins.”

“But since the Church is the Body of Christ, the Church also cooperates in that process,” he said. “And that’s why the prayer of Christians [for the dead] is so, so valuable and so important.”

“I have often felt that the doctrine of purgatory…is one of the greatest signs of God’s mercy,” he added. “It’s saying to people, ‘Look, you know, we all will come to the end of our lives at some stage. And we all look back with regret, and a certain amount of fear, that we haven’t been as faithful as we should have been.’”

“It’s a beautiful thing that God is sufficiently…realistic about our fallen human condition that He provides us with the opportunity of being definitively purified after death,” he said.

What is purgatory and why do souls go there?

The purpose of purgatory, Father O’Callaghan said, “is the purification of the human soul after death, of the faults and defects, and, as it were, gaps in their lives that still have to be clarified.”

The priest cited the teaching of St. Thomas Aquinas, who said purgatory achieves three things: forgiveness of venial sins, purification of sinful inclinations and the removal of the temporal punishment due to sin.

The first two are purified by “the penetrating love of Christ,” he said.

But for the temporal punishment of sin, which can also be described as a “moral debt,” we can be helped by the prayers of other Christians, he said. Because “the fact is that with our sins, not only do we offend God, and we do damage to ourselves, but also we do damage to other people.”

Is purgatory a place or is it, as Pope Benedict XVI said, citing St. Catherine of Genoa, more of “an interior fire?”

“There are a lot of theological speculations on this particular issue,” Father O’Callaghan explained.

He said the fire of purgatory has been interpreted by modern theologians such as Yves Congar, Hans Urs von Balthasar, and Cardinal Joseph Ratzinger (the future Pope Benedict XVI) as “the fire of the face of Christ.”

“And in that sense it’s like a fire,” he said, referencing 1 Corinthians 3:13, which says: “the work of each will come to light, for the Day will disclose it. It will be revealed with fire, and the fire [itself] will test the quality of each one’s work.”

That passage refers to the “idea of a fire that is purifying, that gets rid of the things that are wrong and bad,” the priest said.

“But,” he emphasized, “at the same time, it’s not an impersonal fire: It’s the fire of the one who loves us and saves us and looks after us” — it is the “fire that emanates from the face of Christ.

What do non-Catholic Christians believe about purgatory?

“In general, Protestants have denied the doctrine of purgatory,” Father O’Callaghan said.

This denial dates back to the 16th century and the Protestant Reformation, he said, when Martin Luther and John Calvin thought Catholics were making two mistakes: denying God’s capacity to forgive sins and making salvation dependent on human works.

“In fact, Calvin went so far as to say that the ancient practice of praying for the dead was a mistake, that they shouldn’t have been doing it, and they should have just left things in God’s hands,” the priest said. “But of course, we know that salvation is in God’s hands.”

“As Catholics, we know that God is the one who saves us,” he continued. “But we also recognize the fact that God’s saving power is involved in our lives [in a way], which we have to accept and receive intelligently and willingly with all our heart.”

Diocesan Mass for the Dead 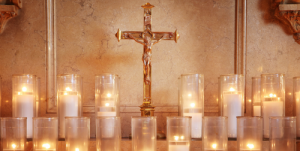 Join your brothers and sisters across the Diocese as we remember our departed loved ones during the Diocesan Mass for the Dead. The Mass will be at 7 p.m. on Monday, Nov. 14 at Saint Patrick Cathedral, Harrisburg.

“And that is a painful process because we have to overcome the sinful inclinations that are present in our lives,” he said. “So that’s why you might say the purifying process, which will take place in a definitive way after death, is already taking place in this life.”

Father O’Callaghan said St. John of the Cross, a contemporary of Luther and Calvin, was someone who developed the idea of the continuity between purification on earth and purification after death.

“In other words, the idea that precisely because God’s grace renews us and goes deeply into our soul, that produces a purifying process…which may not be complete by the time a person dies, before the end of their lives.”

What is the origin of the Catholic Church’s teaching on the existence of purgatory?

The Church’s doctrine on purgatory comes from the Second Book of Maccabees in the Old Testament, Father O’Callaghan said.

In Second Maccabees, the soldiers who were fighting the battles of the Lord “died in God’s service, but at the same time, with defects and with things that they hadn’t done as well as they should have done,” he said, so “what the leader of the Jewish people, Judas, decided to do was to make a collection and send it to Jerusalem so sacrifices would be offered for the dead.”

Scripture calls these sacrifices for the dead in Second Maccabees a “holy and a wholesome thought.”

The idea of purification is also present in the New Testament, he said. The Church Fathers also wrote about purgatory and recorded that Christians in apostolic times were praying for the dead.

The Church did not make a proclamation about the doctrine of purgatory until the Middle Ages, however.

Father O’Callaghan said some people might point to this fact to say the Catholic Church invented purgatory.

“I would see that in another light,” he said. “I would see it that precisely because Christians accepted prayer for the dead, they accepted the existence of purgatory. But since the issue hadn’t been…denied, there was no need to specify anymore.”