The Newspaper of the Diocese of Harrisburg
World Catholic News

Why a New Consecration to St. Joseph is Spreading Like Wildfire 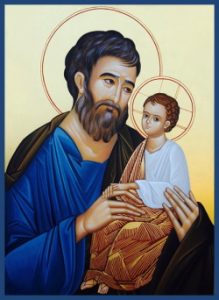 But Father Donald Calloway is hoping to change that, because he thinks the world needs St. Joseph now more than ever. Father Calloway told CNA that he thinks people today are confused about meaning.

Because he has personally had a devotion to St. Joseph for a long time, Father Calloway said he started wondering several years ago whether there was a consecration to the foster father of Jesus, similar to the popular consecration to Mary by St. Louis de Montfort.

If such a consecration already existed, Father Calloway wanted to promote it – he thought St. Joseph’s intercession and example were the antidotes to the confusion people were experiencing. But when he asked at the Vatican and various religious orders, he found that a consecration to St. Joseph did not yet exist in the Church.

“They said, no Father, that’s a great idea. But they said, no, we’ve never heard of anything like that. And so I said, well, I’m going to do it then,” Father Calloway said.

For the next three years, Father Calloway started researching, praying, and compiling a consecration to St. Joseph, the earthly husband of Mary and the foster father of Jesus.

“The word (consecration) technically means setting something aside for a holy purpose. We consecrate altars, for example, because we’re going to use it for Mass. Or we consecrate people we have in religious communities and such,” he said.

“So when we consecrate ourselves to Mary or Joseph, we’re basically entrusting ourselves to their spiritual care because they’re our spiritual parents. …and the answer is no, because we’re not members of a one-parent spiritual family,” he said.

In his book, Father Calloway writes that consecration to St. Joseph means “that you acknowledge that he is your spiritual father, and you want to be like him. To show it, you entrust yourself entirely to his paternal care so that he can lovingly help you acquire his virtues and become holy…St. Joseph, in turn, will give those consecrated to him his loving attention, protection and guidance.”

The first person to entrust themself to the spiritual care of Joseph and Mary was actually Jesus, he added.

“And so we give ourselves to their care, just like Jesus did when he was growing up. He lived under their roof, he was under their care, and he didn’t just go to his mom, you know, he went to his dad as well. So that’s what it is, entrusting ourselves to St. Joseph’s spiritual fatherhood to help us grow in virtue and closer to Christ.”

The consecration to St. Joseph also shares some similarities to the consecration to Mary by Louis DeMonfort, Father Calloway added, like the length (33 days) and the general format, which consists of daily reflections on the life and virtues of St. Joseph, as well as special prayers.

“In the 18th century, when (DeMonfort) came up with his method, he made it 33 days, which is really good (because) if it was only like five or nine days, it’s not enough, you’re not going to really be able to cover a lot of material,” Father Calloway said.

On the other hand, “if it’s like three months long, people are going to be like, yeah, this is too much. So one month is a good amount of time. On a daily basis you go through some readings, you unpack some of the titles, the honors, the privileges associated with St. Joseph…and then you end every day with some prayers. And by the end of that, you’re like, wow, I really know this guy now. I really feel that I want him as part of my spiritual life.”

Engaged couple Robert Morgan and Sarah Kalonick told CNA that the consecration helped them prepare for their upcoming marriage and family life.

In their regular marriage prep, they are given a mentor couple with whom they can meet and ask questions about married life. Kalonick said they’ve started to look to Joseph and Mary as their “other mentor couple.”

“(The consecration) really, in a very accessible and simple way, lets you focus on this hidden saint,” she said. “What are his qualities? What are his virtues? Who is he?” Morgan said he found it easier to relate to St. Joseph than to Mary when it came to the Holy Family.

“I think some of it is trying to reclaim a masculinity that’s been lost over the years in our faith,” he said. “And also as a man, it’s a little easier for me to get the perspective of St. Joseph in Jesus’ story, than it is for me to look from Mary’s side of things.”

On the other hand, Kalonick said that as a woman, growing closer to St. Joseph has been a “healing experience” for her in light of some of the hurt she experienced in past relationships with men.

“It helps heal and form my own perspective of (good relationships),” she said. “Here is a man who is pure-hearted, and virtuous, and loving the Lord, and loving this lady.”

Kalonick said the point is not to “idealize” St. Joseph or to set “false expectations” of real men, but to “get to know the realness of Joseph and who a man can be, who he is, what man is, and to start looking for that in the relationships that you seek out.”

Like the Marian consecration, the consecration to St. Joseph is becoming very popular among Catholics – even though it was just published last year.

“So far people are loving it, and parishes and places that are doing it, they’re loving it,” Father Calloway said. “It’s unbelievable…we almost can’t keep up with the demand.”

Father Calloway said he thinks part of the reason the consecration has been “flying off the shelves” is because the world is starving for good fathers. According to 2017 U.S. Census Bureau data, more than one in four children are growing up in a fatherless home.

“We’ve got a lot of people with a lot of father wounds and absent fathers,” he said. “They don’t know what a father is and they’ve never experienced their loving father or a father who’s present in their lives.”

“Part of what I would like the fruit of this to be is the affirmation that we do have a loving father in St. Joseph, and he’s never going to hurt us. He’s there for us and a good father who wants his children to make it to heaven. And he’s ultimately, like Our Lady, not going to point to himself, but point us to Jesus and help us to grow.”

Another aspect of St. Joseph’s sainthood that may not be well known are the various patronages and titles he holds, Father Calloway added, and each day of the consecration is dedicated to one of these.

Perhaps one of the only well-known St. Joseph traditions, that leans more superstitious than spiritual, is the burying of a St. Joseph statue upside down in the yard, with the belief that he will then help one’s house sell faster. “It’s kind of spiritual bribery,” Father Calloway said.

“They’ll say, ‘I’m not going to turn you right-side up until you sell my house.’ Well what kind of craziness is that?” Rather, there are much more profound things for which St. Joseph’s intercession can be invoked, such as for a good death.

“He’s the patron of the dying, because the tradition says that when he died, he died in the arms of Jesus and Mary. You won’t get a better death than that, so when you pray to him for a happy death…we pray that we would be embraced by Our Lord and Our Lady,” Calloway noted.

St. Joseph is also the patron of virgins, Father Calloway said, because he never had marital relations with Mary.

“We live in a world that’s just filled with lust and perversions of every kind, and we’ve got this pornographic plague right now. And I think that’s something that we can look to him for as well. Not just for virgins, but also for marriages, for couples to be chaste within their marriage…and to have that dignity for each other and that respect for each other.”

Some of Father Calloway’s other favorite titles for St. Joseph include Pillar of Families and Glory of Domestic life, he said, but the “money title” is Terror of Demons.

“A lot of times you look at (artwork of St. Joseph) and it doesn’t look too intimidating. He looks old with a cane,” Father Calloway said. “But the reality is, he wasn’t some old man. And that’s really not a cane – it’s like a staff of a warrior.”

“Satan knows the power that (St. Joseph) has because he has such familiarity and intimacy with Christ. Just like when Our Lady asks Jesus to do something, she’s asking as his mother, when Joseph asks, he’s asking Jesus as his father, and so there’s power in that petition and Satan is terrified by that.”

(This article was originally published by CNA on March 8, 2020.)