Who Will Vote for a New Pope after Francis? A Look at the Cardinals by the Numbers 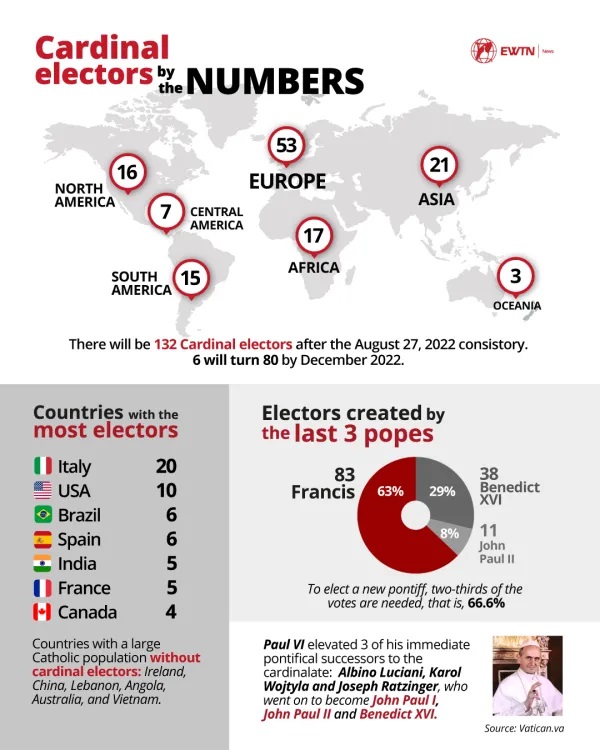 The College of Cardinals is the group of the pope’s closest assistants and advisers, made up of all of the Catholic Church’s cardinals from around the world. On August 27, Pope Francis created 20 new cardinals, bringing the total number in the college to 229.

But not all of the 229 cardinals will be eligible to elect a new pope.

Pope St. Paul VI established in 1970 that cardinals aged 80 and over cannot participate in the process of electing a pope — thus, cardinals who are younger than 80 are known as “electors.” Paul VI also established a numerical limit for the number of electors, capping it at 120.

At his August 27 extraordinary consistory — a meeting of all the world’s cardinals — Pope Francis created 16 new cardinals who will be electors, bringing the total number of cardinals who are eligible to vote for the next pope in a future conclave to 132. The pope will also create four new cardinals who have already passed 80 years of age.

Europeans account for 53 cardinal electors in the college after the consistory, the most of any region.

Meanwhile, other parts of the world have gained ground, led by the Asia-Pacific region, whose overall representation of voting-age cardinals has risen from 9% in 2013 to 17% in 2022, an analysis from Pew Research Center found.

Sub-Saharan Africa is on the upswing with electors as well, rising from 9% to 12%. Latin America and the Caribbean have had a more modest gain, rising from 16% to 18%.

In 2007, Pope Benedict XVI returned to the long-standing tradition requiring a two-thirds majority to elect a pope; St. John Paul II had allowed for a simple majority for a valid election in the case of extended deadlock.