The Vigil of Christmas 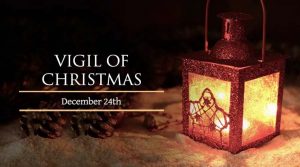 In the first ages, during the night before every feast, a vigil was kept. In the evening the faithful assembled in the place or church where the feast was to be celebrated and prepared themselves with prayers, readings from Holy Writ (now the Offices of Vespers and Matins), and sometimes also by hearing a sermon. On such occasions, as on fast days in general, Mass also was celebrated in the evening, before the Vespers of the following day. Towards morning, the people dispersed to the streets and houses near the church, to wait for the solemn services of the forenoon.

This vigil was a regular institution of Christian life and was defended and highly recommended by St. Augustine and St. Jerome (see Pleithner, “Aeltere Geschichte des Breviergebetes”, pp. 223 sq.). The morning intermission gave rise to grave abuses; the people caroused and danced in the streets and halls around the church (Durandus, “Rat. Div. off.”, VI, 7), and St. Jerome speaks of these improprieties (Epist. ad Ripuarium).

The Synod of Seligenstadt (1022) mentions vigils on the eves of Christmas, Epiphany, the feast of the Apostles, the Assumption of Mary, St. Laurence, and All Saints, besides the fast two weeks before the Nativity of St. John. After the eleventh century, the fast, Office and Mass of the nocturnal vigil were transferred to the day before the feast, and even now the liturgy of the Holy Saturday (vigil of Easter) shows, in all its parts, that originally it was not kept on the morning of Saturday, but during Easter Night. The day before the feast was henceforth called vigil.

A similar celebration before the high feast exists also in the Orthodox (Greek) Church, and is called pannychis or hagrypnia. In the Occident only the older feasts have vigils, even the feasts of the first class introduced after the thirteenth century (Corpus Christi, the Sacred Heart) have no vigils, except the Immaculate Conception, which Pope Leo XIII singled out for this distinction. The number of vigils in the Roman calendar besides Holy Saturday is 17, including the eves of Christmas, the Epiphany, the Ascension, Pentecost, the Immaculate Conception, the Assumption, the eight feasts of the Apostles, St. John the Baptist, St. Laurence, and All Saints. Some dioceses and religious orders have particular vigils on the Saturday next before the feast of the Seven Dolours of Our Lady; the Carmelites, on the eve of the feast of Mount Carmel. In the United States only four of these vigils are feast days: the vigils of Christmas, Pentecost, the Assumption, and All Saints.