Saint Spotlight – The Martyrs of Compiegne 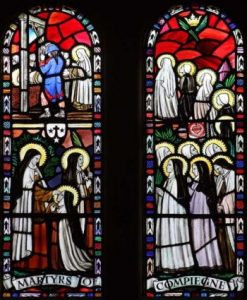 On July 17, the Church commemorated 16 French religious sisters who died at the hands of the French Revolution, hastening the end of its Reign of Terror.
Compiegne is about an hour’s drive away from Paris, where the French Revolution broke out in 1789. Increasingly radical governments took power in France, targeting the Catholic Church as revolutionaries exalted reason over religion. Streets named after saints were renamed, churches were desecrated, and Sunday was erased from the calendar.
The revolution shattered the monastic peace of the sisters of Compiegne in 1790, when the government passed the Civil Constitution of the Clergy, which outlawed religious life.
Government officials came to the convent, interviewing each sister and presenting them with a choice: break your vows or risk further punishment. Each sister refused to abandon their life of poverty, chastity and obedience.
Mother Teresa of St. Augustine, the monastery’s prioress, hastened to make arrangements for the sisters to take shelter in the city, where they courageously continued to practice community prayer.
But the French Revolution continued to radicalize, and it further devolved into the Reign of Terror under Maximilien Robespierre and Committee for Public Safety, a provisional government, in 1793.
In 1794, the government arrested the Carmelites and detained them in Paris – where execution by guillotine was all but inevitable.
The trial accused the sisters of being religious fanatics and counter-revolutionaries, evidenced by a fleur-de-lis stitched into an altar cloth, which was a symbol for the monarchy.
All 16 were sentenced to death on charges of treason. Among them were 11 nuns, three lay sisters and two tertiaries.
On a summer night, the sisters were taken through the streets of Paris on an open cart. Onlookers berated the sisters with their hatred for the Church, yelling insults and throwing things at them.
At the guillotine, the usual crowd gathered to watch the executions. But this time was different.
On July 17, 1794, without any sign of fear, the sisters forgave their guards and approached their death singing hymns of praise. The crowd fell silent as each sister approached Mother Teresa of St. Augustine and kissed the statue of the Virgin Mary she held in her hands, before asking for her permission to die.
“Permission granted,” the prioress said to each one before herself placing her head under the guillotine.
Within the following few days, Robespierre himself was executed, bringing an end to the Reign of Terror. French Catholics had no doubt that the sacrifice of the sisters helped bring about the end to the horrors of the revolution.
The martyrs of Compiegne were proclaimed venerable in 1902 and were beatified in 1906. The Church celebrates them July 17.
The story of the Carmelites who helped end the French Revolution has inspired artwork, several novels, and at least one opera, Dialogues of the Carmelites, by Francis Poulenc.
The opera depicts the sisters singing the Salve Regina, until one by one their voices fall into silence.
Catholic News Agency