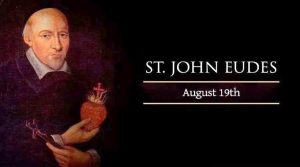 St. John Eudes was a French missionary and the founder of the Congregation of Our Lady of Charity, and was also the author of the liturgical worship of the Sacred Hearts of Jesus and Mary.

He was born at Ri, France, on November 14, 1601. The son of a farmer, he tried to live in imitation of Jesus from the time he was a child. He went to the Jesuit college at Caen when he was 14, taking a vow of chastity and, despite his parents’ wish that he marry, joined the Congregation of the Oratory of France in 1623.

When he was ordained a priest in 1625 at the age of 24, he was immediately thrust into the service of victims of the plague, whom he cared for at great risk to his own life. He also began preaching missions and was known as the greatest preacher of his age, preaching all over France, especially throughout Normandy.

In 1641, he founded the Congregation of Our Lady of Charity of the Refuge, to provide a refuge for prostitutes. In 1643, he founded the Society of Jesus and Mary for the education of priests and for missionary work.