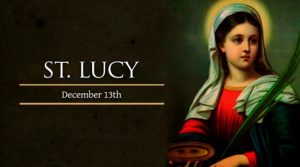 St. Lucy is a virgin and martyr of Syracuse in Sicily, whose feast is celebrated on December 13. According to tradition, St. Lucy was born to rich and noble parents in the year 283. Her father was of Roman origin, but his early death left her dependent upon her mother, whose name, Eutychia, seems to indicate that she was of Greek heritage.

Like so many of the early martyrs, Lucy had consecrated her virginity to God, and she hoped to devote all her worldly goods to the service of the poor.

Her mother arranged a marriage for her, but for three years the young woman managed to postpone it. Lucy prayed at the tomb of St. Agatha to change her mother’s mind about her faith. As a result, her mother’s long hemorrhagic illness was cured, and she consented to Lucy’s desire to live for God instead of being married.

Lucy’s rejected bridegroom, Paschasius, denounced Lucy as a Christian. The governor planned to force her into prostitution, but when guards went to fetch her, they could not move her even when they hitched her to a team of oxen. The governor ordered her to be killed instead.

After a gruesome torture which included having her eyes torn out, she was surrounded by bundles of wood which were set afire, but the fire quickly died out. She prophesied against her persecutors, and was then executed by being stabbed to death with a dagger.

According to later accounts, Lucy warned Paschasius he would be punished. When the governor heard this, he ordered the guards to gouge out her eyes; however, in another telling, it was Lucy who removed her eyes in an attempt to discourage a persistent suitor who greatly admired them. When her body was being prepared for burial, they discovered her eyes had been restored. This and the meaning of her name (“light” or “lucid”) led to her patronage with eyes; the blind, eye trouble, and other eye ailments.