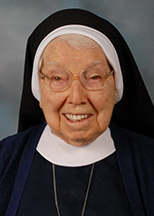 Sister M. Romaine Krug, IHM, died on Friday, November 18, 2022 at Our Lady of Peace Residence in Scranton, Pa. She was 109 and was the oldest living member of the IHM Congregation.

Born Verna Matilda Krug on September 12, 1913, in Ashville, Pa., she entered the Congregation of the Sisters, Servants of the Immaculate Heart of Mary on September 8, 1940. She made her final profession of vows on August 2, 1946. Sister Romaine received a bachelor’s degree in education/social science from Marywood College and a master’s degree in home economics/foods from New York University.

Sister Romaine served as a teacher at St. Joseph High School in Danville from 1943-1953, and as a faculty member of Marywood College in Scranton from 1953-1971.

At the Marian Convent in Scranton, Sister Romaine served as dietician and as a member of the dietary staff. She was faithfully committed for many years to the work of the Diocese of Scranton’s Enthronement of the Sacred Heart Guild, where she served as moderator from 1988-1992, and as administrative assistant from 1992-2009.

From 2010 until the time of her death, Sister Romaine was a prayer minister at Our Lady of Peace Residence in Scranton.

She is preceded in death by five brothers and seven sisters, including Sister M. Hermine, IHM, and Sister M. Franceline, IHM. She is survived by a brother, a sister and several nieces, nephews, grandnieces, grandnephews, great-grand nieces and great-grand nephews.

Interment will be at St. Catherine’s Cemetery in Moscow, Pa. Because of restrictions related to the coronavirus, the funeral Mass and graveside service are private.