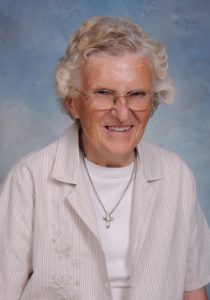 Sister Joan Dreisbach, OSF, (formerly Sister Henry Kathryn) died in Assisi House in Aston, Pa., on Monday, January 2. She was 93 and had been a professed member of the Sisters of St. Francis of Philadelphia for 73 years.

Sister Joan was born in Allentown, Pa., where she was a member of St. Francis Parish and a graduate of Central Catholic High School. She entered the Congregation of the Sisters of St. Francis in 1947 and professed her first vows in 1950. She earned a BS in Nursing from Villanova University and a Masters in Administration from St. John University. She ministered primarily in healthcare and healthcare administration.

Sister Joan ministered for 31 years in Archdiocese of Philadelphia. She began her time as a Sister in education, teaching at Resurrection School in Chester before becoming a student nurse at St. Joseph Hospital in Philadelphia and St. Francis Hospital in Bryn Mawr. After receiving her nursing degree, Sister Joan served as head nurse and taught obstetrics at St. Mary Hospital, Philadelphia; served in administration at Villa St. John Vianney Hospital, Downingtown; and was coordinator of health services for the congregation at Our Lady of Angels Convent, Aston. In later years she served as a volunteer at St. Stanislaus School and Parish in Lansdale. In 2015, she moved to Assisi House, the congregation’s retirement residence in Aston, where she served in prayer and hospitality ministry until her death.

Sister Joan ministered for 20 years in the Diocese of Harrisburg at St. Joseph Hospital School of Nursing, where she taught medical/surgical nursing for a year before becoming director of the school.

She also served for 17 years in the Trenton Diocese in parish ministry at St. Leo the Great Parish in Linwood, where she served when she was awarded the Nostrum Ecclesiam Tempus Award by Bishop John M. Smith (2007).

All services will be held in Assisi House on Thursday, January 12, and will be livestreamed. A Christian Wake Service will be held at 9:30 a.m., followed by a viewing. Mass of Christian Burial will begin at 11 a.m. Burial will be in Our Lady of Angels Cemetery in Aston.

Sister Joan is survived by her sisters, Mary Kehl and Margaret (Peg) Murtaugh; her sister-in-law Nancy Dreisbach; her nieces and nephews; and her Franciscan family. Donations in her name can be made to the Sisters of St. Francis Foundation, 609 S. Convent Road, Aston, PA 19014.