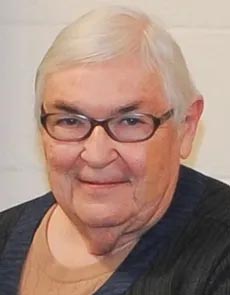 Mary C. Furlong, 81, passed away suddenly on Monday, November 21 at her home.

She was born July 14, 1941 in Muscatine, Iowa the daughter of the late Edward and Catherine Furlong. Mary earned a bachelors in Social Studies and Education and a masters in Political Science from the University of Iowa.

She was an English and social studies teacher and member of the Delone Catholic Hall of Honor, Class of 2018. She began her career at Delone Catholic High School in McSherrystown in 1965 and retired in 2000, but her service as an educator continued on a global scale, and her volunteer service to Delone Catholic would continue until her death. Her work directly to the benefit of Delone Catholic and its students has cemented her legacy as an exemplary “Doer of the Word.”

Though retired from teaching at Delone Catholic for more than 20 years, Mary continued to volunteer at Delone Catholic and challenged alumni and current students and faculty members to venture outside their comfort zone and see the world differently. She was an invaluable resource to the school due to her vast network of relationships with alumni and their families. In addition to teaching English and social studies, Ms. Furlong coached forensics at Delone Catholic, where her work in and out of the classroom inspired students to find ways to make a positive difference wherever they could.

She was a co-founder of the Mock Political Convention, which began in 1968 and has continued every four years since. She initiated and coordinated the school’s human rights assembly for 15 years, served on the faculty advisory committee, and was a three-term faculty representative on the Board of Directors. She initiated a mock trial team which placed second in the state twice. She also revived the forensics team, which placed third nationally, won two state championships and finished second in the state three times under her guidance.

Mary is a member of the Pennsylvania High School Speech League Hall of Fame. After her retirement from Delone, she spent more than two years as a teacher trainer for the Zambian Open Community Schools, organizing English and social studies curricula and training more than 50 teachers. She later served as an HIV/AIDS program coordinator at the Kabwe Kara Counseling Ranchhod Hospice and Children Centre in Zambia. She returned to Africa as a professor of political philosophy at Kachebere Major Seminary in Malawi. In addition to her global service, her work as the Adams County Development Coordinator for RSVP of the Capital Region for more than a decade helped to provide meaningful volunteer opportunities to senior citizens throughout south central Pennsylvania.

She volunteered at the Eisenhower National Historical Site as a tour guide and was a Companion with Sisters of St. Francis of Philadelphia for 25 years and served on their Justice, Peace and Integrity of Creation Committee.

A Memorial Mass will be celebrated on Saturday, December 3, in the Lawrence B. “Sonny” Sheppard, Jr. Memorial Gymnasium at Delone Catholic High School at 1 p.m., with a reception to follow at the school. In lieu of flowers, memorials can be made to Delone Catholic High School or the Adams County Library. The Mass will be livestreamed on Delone Catholic Broadcast Network, at the school’s YouTube channel and also at www.delonecatholic.org/apps/pages/dcbn. Online obituary and condolences are available at www.monahanfuneralhome.com.