In World Peace Day Message, Pope Francis Asks, ‘What Did We Learn from the Pandemic?’ 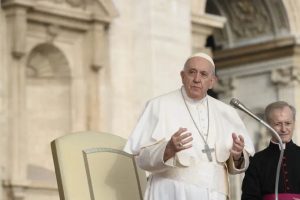 In a message sent to heads of state across the world, Pope Francis has asked leaders to reflect on what lessons can be learned three years after the start of the COVID-19 pandemic.

The Vatican released on December 16 the pope’s 2023 World Peace Day message, in which he posed a series of questions:

“What did we learn from the pandemic? What new paths should we follow to cast off the shackles of our old habits, to be better prepared, to dare new things? What signs of life and hope can we see, to help us move forward and try to make our world a better place?”

Pope Francis wrote in the message that “certainly after directly experiencing the fragility of our own lives … the greatest lesson we learned from COVID-19 was the realization that we all need one another.”

He added: “We also learned that the trust we put in progress, technology and the effects of globalization was not only excessive but turned into an individualistic and idolatrous intoxication, compromising the very promise of justice, harmony and peace that we so ardently sought.”

The pope underscored that “in our fast-paced world, the widespread problems of inequality, injustice, poverty and marginalization continue to fuel unrest and conflict, and generate violence and even wars.”

“We cannot continue to focus simply on preserving ourselves; rather, the time has come for all of us to endeavor to heal our society and our planet, to lay the foundations for a more just and peaceful world, and to commit ourselves seriously to pursuing a good that is truly common,” he said.

The World Day of Peace — instituted by St. Paul VI in 1968 — is celebrated each year on January 1, the Solemnity of Mary, Mother of God. The message is sent by the Vatican Secretariat of State to governments around the world.

The pope’s message for the 2023 World Day of Peace, the 56th celebration, is titled “No one can be saved alone: Combatting COVID-19 together, embarking together on paths of peace.”

In the text, Pope Francis included one paragraph about the ongoing war in Ukraine, which he described as “a setback for the whole of humanity.”

“At the very moment when we dared to hope that the darkest hours of the COVID-19 pandemic were over, a terrible new disaster befell humanity. We witnessed the onslaught of another scourge: another war, to some extent like that of COVID-19, but driven by culpable human decisions … Clearly, this is not the post-COVID era we had hoped for or expected,” Pope Francis said.

At a December 16 Vatican press conference presenting the pope’s text, Cardinal Michael Czerny repeated the pope’s question: “What have we learned from COVID?”

The Canadian cardinal, who serves as the prefect of the Vatican Dicastery for Promoting Integral Human Development, offered his own reflection on how the pandemic was handled.

Cardinal Czerny said: “The world needed a well-supported international plan to deal with the pandemic. That was utterly lacking. Instead, massive misinformation, finger-pointing, false claims and panic-mongering prevailed; while decision-makers gave higher priority to the claims of patent-holders than to people’s needs around the world.”