The Newspaper of the Diocese of Harrisburg
NewsParishes

Fish Dinners Continue to Reel-In Customers, as Parishes and Councils Transition to Take-Out to Ensure Safety

The parking lot at Sacred Heart of Jesus Parish in Cornwall was a sea of vehicles for the weekly Wednesday fish fry on March 3.

Parked bumper-to-bumper and lined up side-by-side, customers from surrounding Lebanon and Lancaster County communities filled the lot outside the parish center as the pastor, Father Rodrigo Arrazola, waved a welcome from his post inside the glass doors.

At first glance, it looked like any other fish dinner held there over the years: a supportive clientele eager for dinners freshly-prepared by parish volunteers.

“In the past, our dinners were eat-in, with sit down service and some take-out. We have a very loyal clientele that comes from Lancaster, Hershey, Pine Grove, Lebanon and of course our parishioners. They enjoy camaraderie with family and friends, as well as the food,” said co-coordinator Bernadette Stumpf. “But because of the COVID restrictions in place, we cannot do inside seating at this time. So we now offer take-out or curbside pick-up only.”

Sacred Heart is one of at least two dozen parishes, schools and organizations within the Diocese that embarked on new formats for Lenten meals to meet COVID-safety measurements while continuing to hold the annual fundraisers. 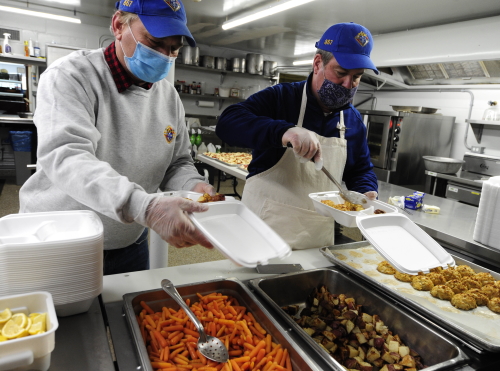 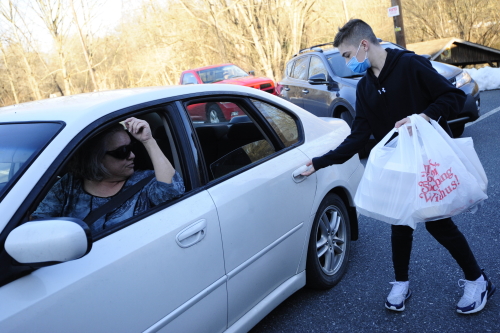 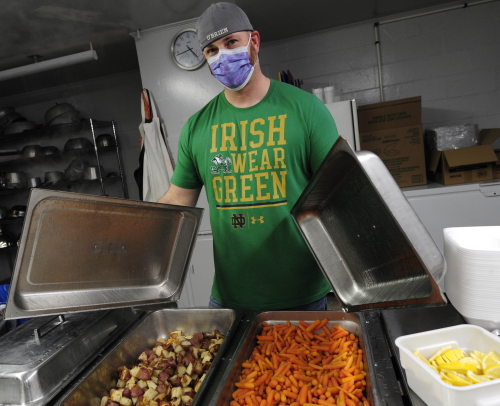 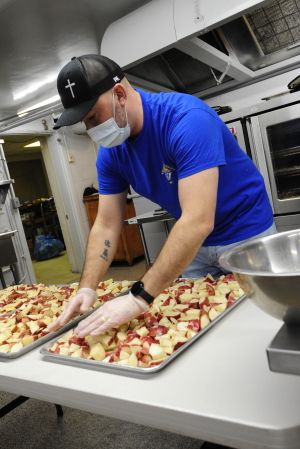 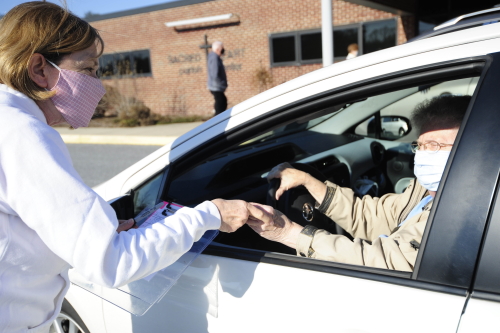 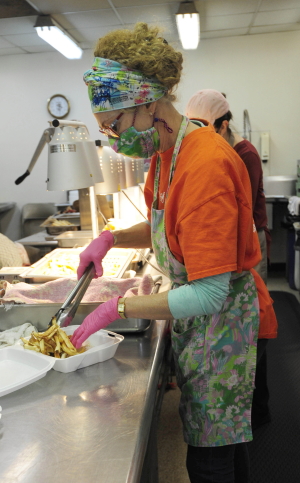 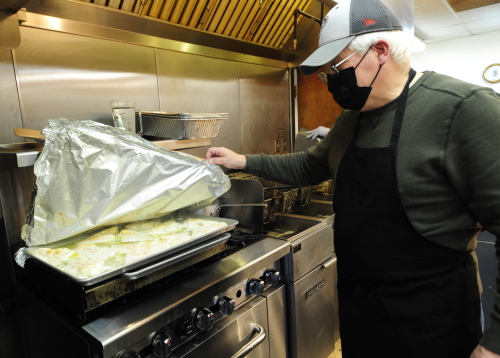 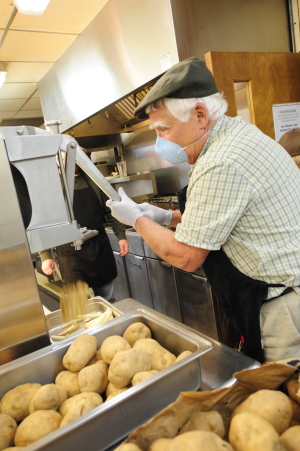 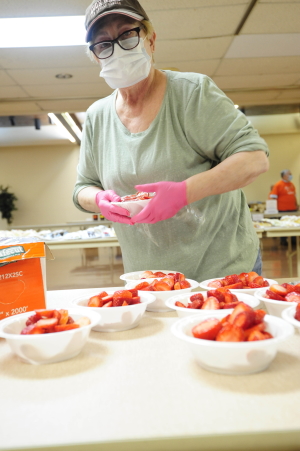 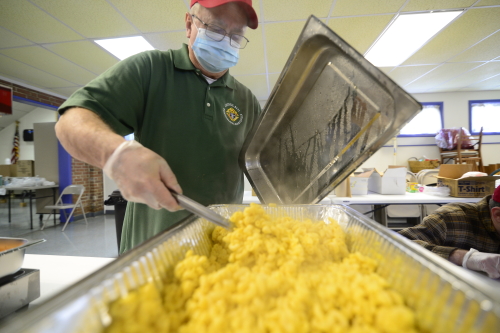 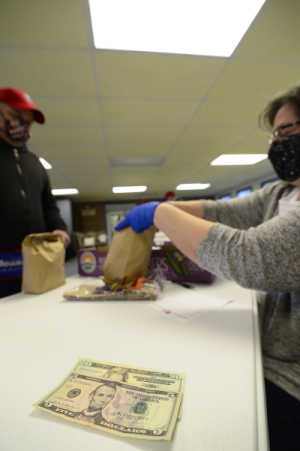 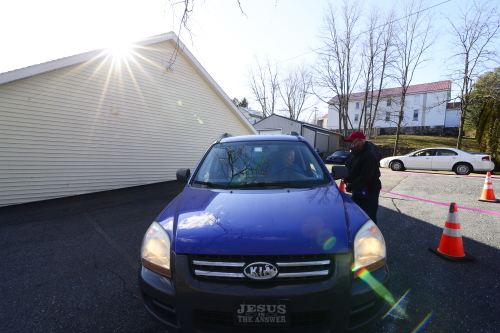 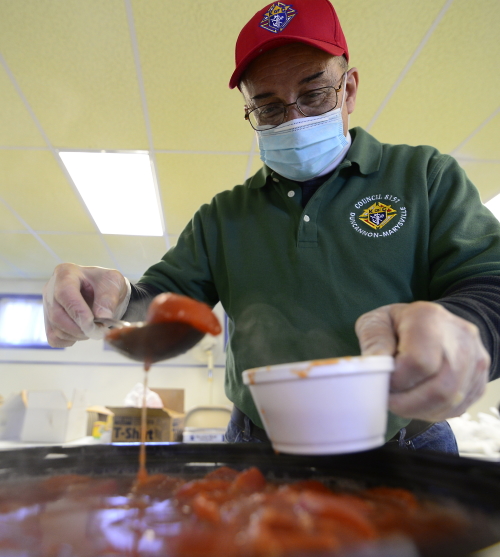 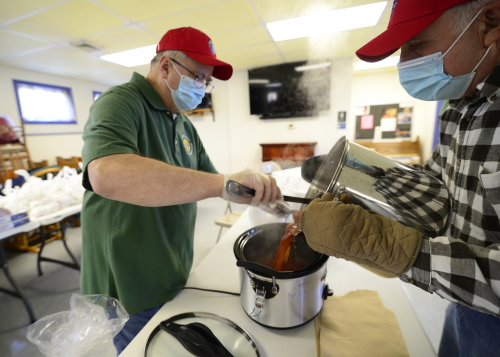 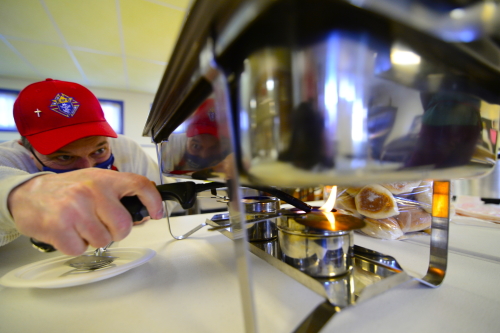 The Catholic Witness visited three locations the first week of March – Sacred Heart in Cornwall and Knights of Columbus Councils 867 in Lancaster and 8151 in Duncannon/Marysville – and found innovative and successful approaches that continue to hook the public and raise crucial funds for parishes and programs.

Small but Mighty in Duncannon

The self-described “small but mighty” 21-member Knights of Columbus Council 8151 of Our Lady of Good Counsel in Marysville and St. Bernadette in Duncannon is in their fourth year of serving fish dinners. They received approval from their pastor, Father Dijo Thomas, MSFS, to sail forth with a curbside format this Lent.

“We’ve always done take-out, but we’ve never done it 100 percent; they could come in and take their meals out,” said Jerry Kruba, Treasurer of Council 8151 and coordinator of the fish dinners.

“Now, we stand outside and take orders at the car, collect their money, rush in here and then deliver the meal,” he said. “We’re trying to keep people safe in their vehicles and give them a nice, hot meal. The people miss the community, the contact, but they’re thankful that we’re still doing this.”

“Being that this is a new style of doing it, and we had snow our first week, I thought we wouldn’t break even,” Kruba said. “But we did well; we sold 126 meals our first week, which is about average for us. It was way better than I thought under those conditions.”

Fried haddock, macaroni and cheese, stewed tomatoes, applesauce, a dinner roll and dessert aren’t the only things on the menu at the serving site in Duncannon. The meals come with a healthy dose of camaraderie, too.

“In the winter and early spring, people don’t get out a lot. This gets them out,” Kruba said. “Just driving here might not seem like a big deal, but it is. They talk to people from their window and joke around until their meal comes. It lets them know how good we used to have it. Just to get a taste of that, they really like it.”

Beyond the good food and good company, Council 8151’s fish frys serve as a fundraiser for charitable outreach.

Funds from the sale support the Knights in their efforts to help members of the community, regardless of their religious affiliation. The Council, for instance, has helped with the purchase of medication and food, as well as the installation of a washer and dryer for a family in need.

“We do a lot of community outreach. If we get word that there is somebody in need in town, we’re there,” Kruba said.

The council has also sponsored seminarians and a deacon and donated to Project Rachel to help post-abortive women. Annually, they purchase billboards along Routes 11 and 15 with pro-life and Christmas messages and routinely distribute holy cards and Catholic literature.

“We’re at the beck and call of the bishop and the priests. If they say, ‘Knights, we need some help,’ we find a way to get it done,” Kruba remarked.

“The fish dinners are by far our largest income source. If we would lose these, we would lose a lot of our ability to do things,” he added. “We’re trying to do as much as we can. We don’t keep much money in our account. As soon as it comes in, we’re going to use it to help people.”

Bernadette Stumpf joined Sacred Heart of Jesus Parish in Cornwall five years ago and quickly set out to get involved in parish fundraisers, including volunteering at the fish fry and the parish festival.

Today, she is a co-coordinator of the Wednesday Lenten dinners – held midweek to take the market on any competition.

“I just enjoy it,” Stumpf said amid a flurry of activity as volunteers established an assembly line of cooks, order-takers, cashiers and delivery runners. “The camaraderie with the parishioners is wonderful and it’s just a great time.”

This year, Sacred Heart opted to offer indoor take-out and curbside pick-up. Patrons can order from their vehicle or from inside the parish center and take their dinners home.

The menu features baked or fried fish, fresh-cut fries or baked potato, cole slaw or applesauce and a dinner roll. Also popular on the menu are desserts from Bernie’s Bakers. Several dozen varieties of cakes, pies, cookies, brownies and cupcakes form a rainbow of sweets across several tables for customers to select.

The delightful assortment is overseen by lifelong parishioner Bernie Reppert, who, at 93 years of age, continues to work the fish fry by slicing and wrapping the goodies.

Bernie and her workers supply a tooth-achingly sweet number of desserts throughout the length of the nine weekly meals, given that Sacred Heart serves several hundred patrons every Wednesday.

Even a snowstorm during the first week of the fish fry didn’t slow things down.

“We came very close to canceling the dinner because of the snow, but we decided to go through with it and served an amazing 400 meals despite the weather,” Stumpf noted. “Since then, we’ve increased each week. This past week, served over 750 meals in three hours.”

Monies raised from the $10 dinners support parish efforts, as determined by the pastor and the parish finance committee.

“We are truly blessed to have a loyal clientele, and we are truly thankful to the parishioners that take time out of their busy schedules to assist in making our fish dinners a huge success,” Stumpf said. “I’m so thankful for the people who show up to help us every week. We couldn’t do it without them.”

After a long year of empty chairs and tables at their council home in Lancaster, Knights of Columbus Council 867 decided to catch patrons with drive-through Lenten meals.

Pre-pandemic, the council’s headquarters on the New Danville Pike was the place for weekly Friday dinners, bingo and other fundraisers. With the facilities and the experience in place, leadership set out to offer a different meatless curbside meal every week.

“The first week was ok. We had about 60 people. The second week, we had 80. Now we’re up to 115 dinners, plus seven kids’ meals. We’re starting to get recognized,” said Ed Zalewski, president of the Columbus Association for Council 867.

“Going in, we didn’t know what to expect because we’ve never done take-out, but it’s been amazing to see that quite a few people call back to order again. Others called to give us a big thumbs-up on the dinners, and that gives us confidence and keeps us going,” he said.

Council 867’s fundraiser features a new menu every week. Among the offerings: Beer-battered haddock and macaroni and cheese; steamed shrimp and rice pilaf; two crab cakes and roasted potatoes; salmon with mango salsa; cod with buttered pasta; traditional fish and chips; and a shrimp and crab cake combo. Each dinner includes a vegetable, side salad and dessert.

“We wanted to offer something different and change things up for people,” Zalewski said of the selections. “Eric Aponte is a professional chef, so he knew what to put together. Shawn O’Brien is our manager, so he’s been doing kitchen work for a few years now. Jim Schoeplein is my right-hand guy; he’s always around where needed.”

Because of the changing menu, patrons must call in their orders by Wednesday of each week and indicate their time of pick-up, so the Knights can provide a timely and hot meal.

Supported by runners who deliver the meals, the four Knights work an assembly line of seafood, vegetables and side dishes that keep customers in a steadily-moving stream of vehicles in the parking lot.

“It’s a job for us,” Zalewski admitted. “I have a full-time job that I’m leaving to come here on Fridays, and it’s the same thing with the other guys. But it’s been fun. You see people pull up in their car that you haven’t seen in a while and you get to talk to them for a few minutes. The camaraderie is one thing, but it’s also a job that we’re doing here. We’re constantly rolling and moving, and it’s a great feeling to see these people again.”

Like their counterparts’ efforts, Council 867’s Lenten dinners are a critical fundraiser too. The council is associated with four of Lancaster city’s parishes: Assumption of the Blessed Virgin Mary, St. Joseph, St. Anthony of Padua and Sacred Heart of Jesus.

“Anything that comes up – whether it’s Coats for Kids, Christmas parties, Easter egg hunts – we try to do what we can for support,” Zalewski said. “We also assist police and fire departments, schools and facilities for the elderly.”

“We have the members to do it and the facility to do it. The Columbus Association is our home base, and we’re doing well here with good volunteers and a good core of people to keep it going,” he added. “Whenever we can recruit more members, that means more volunteers and a lot more going to the churches.”

“The Knights do an incredible amount of work out there. There are a lot of people doing a lot of work for the churches, and we should be proud of that. That’s what drives us in the work we do,” he said.

Hungry for more Lenten fish dinner information? Click here for a listing of those offered throughout the Diocese.

(Photos by Chris Heisey and Jen Reed, The Catholic Witness.)