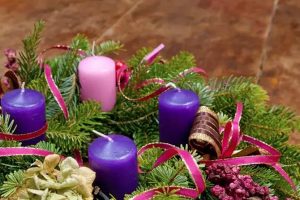 The First Sunday of Advent 2022 was November 27, exactly four weeks before the Sunday of Christmas this year, and while the Church provides this time to allow you to be caught by the joy of the Incarnation, you can be easily caught by surprise that it is Christmas.

The people of Israel waited for generations for the promised Messiah to arrive. Their poetry, their songs and stories, and their religious worship focused on an awaited savior, whom God had promised, over and over, would come to them to set them free from captivity, and to lead them to the fulfillment of all that God had chosen for them.

Israel longed for a Messiah, and John the Baptist, who came before Jesus, promised that the Messiah was coming, and could be found in Jesus Christ, God’s Son, the “Lamb of God who takes away the sins of the world.”

Advent is the time in which we prepare for Christmas, the memorial of Jesus Christ being born into the world. Preparations are practical, like decorating a tree or stringing lights, but they’re also intended to be spiritual.

During Advent, we’re invited to enter more frequently into silence, into prayer and reflection, into Scripture, and into the sacramental life of the Church, all to prepare for celebrating Christmas.

The Catechism of the Catholic Church says the goal of Advent is to make present for ourselves and our families the “ancient expectancy of the Messiah…by sharing in the long preparation for the Savior’s first coming.”

What does the word Advent mean?

Advent comes from the Latin ad+venire, which means, essentially “To come to,” or “to come toward.” Ad+venire is the root of the Latin “Adventus” which means “arrival.” So Advent is the season of arrival: The arrival of Christ in our hearts, in the world, and into God’s extraordinary plan for our salvation.

Advent is a slightly different length each year. It starts four Sundays before Christmas. But because Christmas is on a fixed date, and could fall on different days of the week, Advent can be as short as three weeks and a day, or as long as four weeks.

Is Advent the “new year?” Advent is before Christmas.

Many of the customary hymns for Advent highlight the movement of the soul toward what Pope Francis termed in a 2014 homily on Advent as a “horizon of hope.” No hymn epitomizes this better than “O Come, O Come Emmanuel,” with its overtones of expectation and its mournful remorse over the state of man, captive to sin. The cultivation of hope and expectation is also seen in Advent hymns such as “O Come Divine Messiah” and “People Look East.”

The commingled darkness and hope that God will fulfill his promises, a theme characteristic of Advent, deepens with songs like the Spanish carol “Alepun.” The lyrics of “Alepun” move the faithful into an experience of waiting with a pregnant Blessed Virgin Mary while the rhythm and percussion evoke donkey hooves clattering across the plains of Israel to Bethlehem.

Advent is a season of penance marked by joy and, in many ways, a little Lent. This is why the colors of purple and pink — with their ties to penance and the Lord’s Passion, and the joy of Laetare Sunday when Lent is almost over — are the colors of Advent. But did you know that the deep purple of Advent has a blue hue to it to teach the faithful in symbol about the Marian heart of the season?

The lack of church decor also teaches about the penitential nature of the season. In the weeks leading up to Christmas, the lack of flowers on the altar, the restrained use of instruments and the absence of the resounding and angelic Gloria all lead to a deliberate emptiness.

The emptiness will first be filled on the solemnity of the Immaculate Conception, and, later, flowers will be allowed on Gaudete Sunday as the first expression of the festivity of the coming Christmas.

Following the solemnity of Christ the King, Advent begins with echoes of the power of Christ coming in glory before it stretches forward to the humble beginnings of the mystery of the Incarnation.

This means there is a certain focus the Church helps people enter into even in the way the liturgical calendar is marked by very few memorials of saints: just five in the course of the four weeks, most of whom are deeply embedded in the celebration of and preparation for Christmas in various countries.

St. Nicholas is the best known of the five: the generous bishop whose gifts inspired generations of lore and giving. St. Lucy, whose desire to give charity to prisoners in the catacombs meant she wore candles in her hair to free her hands, is another well-known saint with connections to Christmas whom we celebrate in Advent.

The Church also shows forth the importance of Mary during this season, which places her Immaculate Conception on December 8, a solemnity and holy day of obligation, at the very beginning of the liturgical year. Combined with the feast day of Our Lady of Guadalupe on December 12, the Church shows forth what God has wrought in a soul full of grace — a foreshadowing of the entire mystery of salvation in one soul.

Where do Advent wreaths come from? Is it true that they’re just pagan wreaths borrowed by the Church?

The Catholic Church has been using Advent wreaths since the Middle Ages. Lighting candles as we prepare for Christmas reminds us that Christ is the light of the world. And the evergreen boughs remind us of new and eternal life in Christ, the eternal son of the Father.

It is definitely true that Germanic people were lighting up candle wreaths in wintertime long before the Gospel arrived in their homeland. They did so because, well, candle wreaths in winter are beautiful and warm. That a Christian symbol emerged from that tradition is an indication that the Gospel can be expressed through the language, customs, and symbols of cultures that come to believe that Christ Jesus is Lord.

One candle is pink. Why?

There are four candles on the Advent wreath. Three are purple, and they are first lit on the first, second and fourth Sundays of Advent. The pink candle is lit on the third Sunday of Advent, which we call Gaudete Sunday. On that Sunday, in addition to the pink candle, the priest wears a pink vestment, which he might refer to as rose.

Gaudete is a word that means “Rejoice!” and we rejoice on Gaudete Sunday, because we are halfway through Advent. Some people have the custom of throwing “Gaudete” parties, and this is also a traditional day on which Christmas carolers begin caroling door-to-door.

The three purple candles are sometimes said to represent prayer, fasting and almsgiving, the three spiritual disciplines that are key to a fruitful Advent.

When should we put up our tree?

When to put up the tree is a decision that families should decide on their own.

Some people put up their tree and decorate it on the first Sunday of Advent, to make a big transformation in their home and get them into “preparing for Christmas” mode.

Some people put up the tree on the first Sunday of Advent, put on lights the next Sunday, ornaments the next, and decorate it more and more as they get closer to Christmas.

Some people put up the tree on Gaudete Sunday, as a kind of rejoicing and decorate it in the weeks between Gaudate and Christmas.

Though there are many more signs and symbols that communicate the meaning of Advent, these can assist you as you enter the season of expectation, building anticipation for the celebration of Christmas so it doesn’t catch you by surprise.

(Photo by Shutterstock, via CNA.)